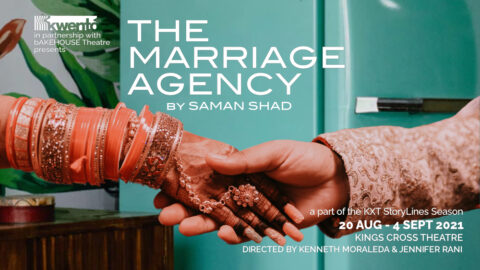 THIS CALL OUT HAS CLOSED

Looking for Cast, Crew & Creatives Positions
The Marriage Agency is a paid opportunity, profit share with a partial up-front payment.

A first generation Indian immigrant. Nas is a positive man and genuinely wants people to be as happy as he is. His exuberance and enthusiasm is contagious and can be felt as soon as you walk into his matchmaking agency – decorated as it is with bright pink walls, glittering saris, and posters of happy smiling couples. Nas’s achilles heel however, is that he is willing to overlook any negatives, including trouble in his own marriage, so taken as he is by a naïve optimism. And while his faith in love can be blinding it also hides a pain he is unwilling to confront.

A confident 15 year old who can’t imagine anything worse than having an arranged marriage herself, Salima is the glue that holds her parents marriage together.

She is also her father’s sounding board and often ends up advising him on matters that are far beyond her age.

Nas and Salima are close because he has been her primary carer from when she was a baby as Tasnim went back to work.

A retired teacher whose wife of 25 years died six years ago. He walks through Nas’s doors more out of curiosity than anything else. His latest girlfriend left him for a doggie hairdresser and he wants to see if Nas can help him find the joy that left his life once his wife died.

After a few minutes of talking to Nas, Bill realises that even if he doesn’t find love, he is sure to have fun going on the ride that Nas takes him on to find The One. He becomes Nas’s first client, but more than that he soon falls into the role of friend and confidant to Nas.

Versatile actor required to play a series of clients of the Marriage Agency, A younger version of Nas, and Richard – a work colleague of Tasnim

A strong-willed, Indian-Australian woman who went along with her parents wishes and got married to Nas. She maybe a Muslim woman but you can’t tell that outwardly. She is the savvy counterpart to Nas’s naïve optimism. She is also the household breadwinner and a corporate fox. Work keeps her distracted from focussing in on her home life and her marriage.

CREATIVES AND CREW CALL OUT